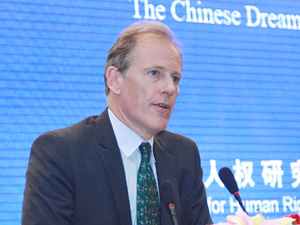 Geneva, June 2016   (Nefail Maliqi) -United Nations Secretary-General Ban Ki-moon today announced the appointment of Andrew Gilmour of the United Kingdom, as Assistant Secretary-General for Human Rights and Head of the Office of the High Commissioner for Human Rights (OHCHR),  report Press UN, transmete the National Information Agency “Presheva Jonë” in Geneva.
Mr. Gilmour succeeds Ivan Šimonović of Croatia to whom the Secretary-General is deeply grateful for his exceptional leadership and advice on human rights issues and the integration of human rights in peace and security matters.
Mr. Gilmour is currently Director for Political, Peace-keeping, Humanitarian and Human Rights affairs in the Executive Office of the Secretary-General, a position he has held since April 2012.  During this time, he has been responsible for spearheading the implementation of the Human Rights up Front initiative.
Since joining the United Nations in 1989, he has held a variety of positions at UN Headquarters and in the field, including in Afghanistan-Pakistan, Kosovo, Palestine, and West Africa.  In recent years he has served as Deputy Special Representative of the Secretary-General (DSRSG) in Iraq and, later, in South Sudan.  Prior to his current position, he was the Representative of the Secretary-General in Belgrade.
Before joining the United Nations, Mr. Gilmour was an Adjunct Fellow of the Center for Strategic and International Studies, Washington, D.C., and worked in the fields of politics and journalism.  He has contributed articles for a wide range of publications throughout his career.  He has masters degrees from Oxford University and also the London School of Economics.

Born in 1964, Mr. Gilmour is married with four children.