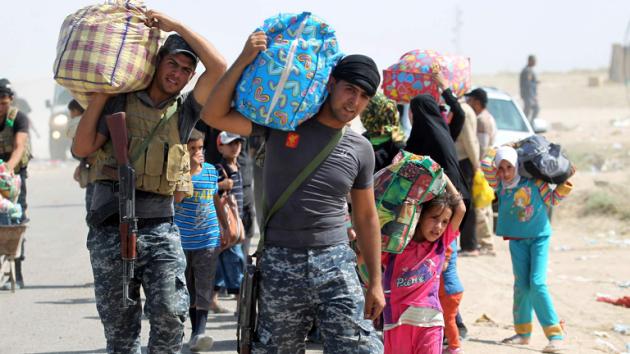 “There are extremely distressing, credible reports that some people who survive the terrifying experience of escaping from ISIL, then face severe physical abuse once they reach the other side,” the High Commissioner said. “Eyewitnesses have described how armed groups operating in support of the Iraqi security forces are intercepting people fleeing the conflict, separating the men and teenage boys from the women and children, and detaining the males for ‘security screening’, which in some cases degenerates into physical violations and other forms of abuse, apparently in order to elicit forced confessions. There are even allegations that some individuals have been summarily executed by these armed groups.”

“While the Iraqi security forces have a legitimate interest in vetting individuals fleeing ISIL-controlled areas to ensure they do not pose a risk to security or to identify individuals who may have committed crimes, such vetting must only be carried out by entities authorised to do so by Iraqi law. Where individuals are being held by other armed groups not legally authorised to detain individuals, the Government must ensure they are either handed over or released safely,” Zeid stressed. “It is paramount that all individuals fleeing the violence around Fallujah must be assumed to be civilians without links to armed groups, unless there is clear and cogent evidence to the contrary.”

The High Commissioner added that the security vetting must be carried out in a transparent manner, in full compliance with international law. If there is substantive information that a particular individual may have committed crimes or may constitute a security risk, the person can be detained in compliance with the law, and the detention must be subject to appropriate judicial review.

“The Prime Minister, and other political, community and religious leaders have made very welcome statements, calling on all those involved in the military operations to do their utmost to protect civilians in all circumstances and to ensure accountability for any individuals perpetrating violations. I urge the Government to take immediate, concrete steps to ensure that these calls are translated into action,” Zeid said.

“The Government must show its commitment to protecting civilians by fully investigating reports that people who have suffered two and a half years of living hell under ISIL, and have faced enormous difficulties and dangers getting out of Fallujah alive, are now facing double jeopardy in the form of serious human rights violations after they have escaped. Those allegedly responsible for these violations must be brought to justice.”

Since January 2014, when Fallujah was captured by ISIL, at least 22,169 civilians have been killed and 43,435 wounded in Iraq. These casualty figures are considered an absolute minimum as they do not include Anbar Province, where Fallujah is located, and also do not include people who died from secondary effects of violence, such as lack of water, food, medicines or health care.