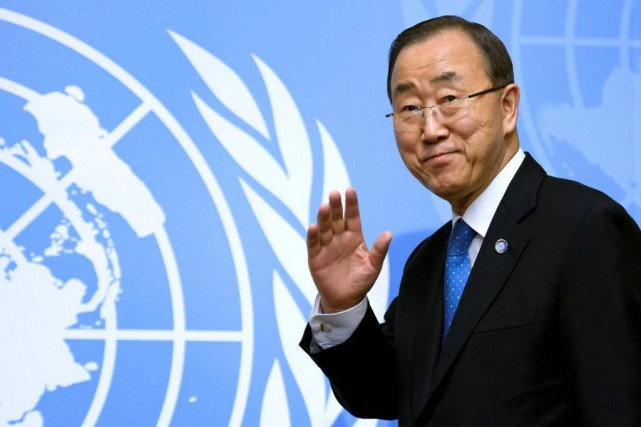 Ban, a South Korean, became the eighth person to hold the United Nations leadership role in January 2007, when he replaced Kofi Annan, a Ghana diplomat. In 2011, Ban was elected to a second term.

He will be replaced by António Guterres of Portugal on Sunday.

“I have been trying during the last 10 years, devoting all my time, passion and energy. But frankly speaking, realistically, I may have to leave many things unfulfilled,”  Ban said this month. “We needed to have much more sense of unity, much more global solidarity and compassion, but we have not been able to see this.”

These are some of Ban’s most important accomplishments — and failures — during his leadership:

The U.N. credits Ban with putting sustainable development at the forefront of the global agenda, starting with the 2007 Climate Change Summit and “extensive diplomatic efforts.”  The Millennium Development Goals, which focused on reducing poverty between 2000 and 2015, attracted more than $60 billion in pledges from governments, businesses and others, according to the U.N. In September 2015, the U.N. General Assembly adopted the 2030 Agenda for Sustainable Development, which aims to tackle poverty, inequality and climate change.

China and the United States, the world’s two largest carbon emitters, joined 193 other countries in adopting the first universal, legally binding global climate agreement. The Paris treaty, which went into force on Nov. 4, aims to stop climate change by limiting a rise in global warming to less than 2 degrees Celsius (3.6 degrees Fahrenheit). “When this year ends, I hope we can all look back with pride, knowing that, together, we seized the opportunity to act for the common good, for a sustainable future and the protection of our common home,” Ban said in September.

Created by the General Assembly in 2010, U.N. Women aims to eliminate discrimination against women and girls, empower women and achieve equality between the sexes. “Empowering women fuels thriving economies, spurring productivity and growth. Yet gender inequalities remain deeply entrenched in every society,” the organization says on its website. Ban is credited with increasing the number of women in U.N. senior management by more than 40%. However U.N. Women recently provoked ire for naming the comic book character Wonder Womanas an ambassador for nearly two months that ended in December. Critics, including more than 44,000 people who signed a petition decrying the appointment, wanted an actual woman to have the role.

Peace between Israel and the Palestinians is still a distant prospect as Ban exits. On International Day of Solidarity with the Palestinian People last month, Ban warned that hopes were fading for a two-state peace agreement, which calls for an independent Palestinian state alongside Israel. He warned both sides that “without urgent steps to revive a political perspective, they risk entrenching a one-state reality.” Last Friday, the U.N. Security Council voted 14-0 for a resolution condemning Israeli settlements on land Palestinians claim for their state, as well as Palestinian attacks on Israelis. Instead of vetoing the resolution, the Obama administration abstained so it would pass, a move that infuriated the Israeli government and President-elect Donald Trump.

Last year, Ban admitted the Security Council was failing Syria because of divisions among member nations looking out for their own interests. In September, he told the General Assembly that “powerful patrons” on both sides of the nearly 6-year-old war “have blood on their hands.” He failed to speak out strongly against atrocities committed early in the war and has failed to rebuke Russia for resuming airstrikes during a temporary cease-fire that targeted hospitals and aid convoys. “I’m not here to make any determinations on who is wrong or who is right,” he said in an October interview with German public broadcaster Deutsche Welle.

Numerous allegations of rape and sexual abuse by U.N. peacekeepers have surfaced in such countries as Haiti, the Central African Republic (CAR) and the Democratic Republic of Congo. Last year, there were 99 allegations of abuse. “For 10 years, the secretary-general has been happy to sweep all of these allegations under the carpet,” former U.N. investigator Peter Gallo told Bloomberg News. Ban’s spokesman, Stéphane Dujarric, refuted Gallo’s comments and said the secretary-general was “shocked to the core” about the abuse. Announcing an investigation in March into such allegations in CAR, U.N. High Commissioner for Human Rights Zeid Ra’ad Al Hussein said the inquiry “must leave no stone unturned.” Prosecutions are carried out by the countries that contribute the peacekeeping troops under U.N. rules.