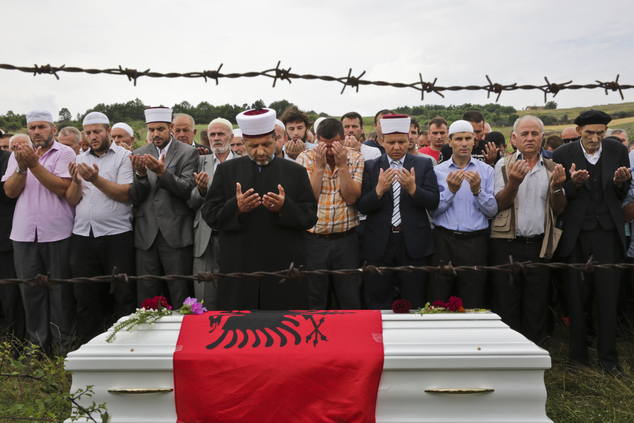 BERLIN (AP) — The Latest on a series of attacks in Germany (all times local): Thousands of ethnic Albanians in Kosovo have attended the funeral of a young man shot dead last weekend in Munich, report ap, transmete the National Information Agency “Presheva Jonë” .

An Imam holds a prayer near the coffin draped with an Albanian flag of Diamant Zabergja 21, during his funeral ceremony in the village of Ropice, Kosovo on Tuesday, July 27, 2016. Zabergia is one of the victims of the Olympia shopping center in Munich, where a shooting took place leaving nine people dead four days ago. Three ethnic Albanians, two women and a man, were among the nine people killed. (AP Photo/Visar Kryeziu)

Dijamant Zabergja, 21, was shot dead by the German-Iranian 18-year-old who went on a rampage at a Munich mall last Friday, killing nine people and wounding dozens before killing himself.

Segashi’s funeral was also being held Tuesday in Kosovo while Sulaj will be buried in Germany.