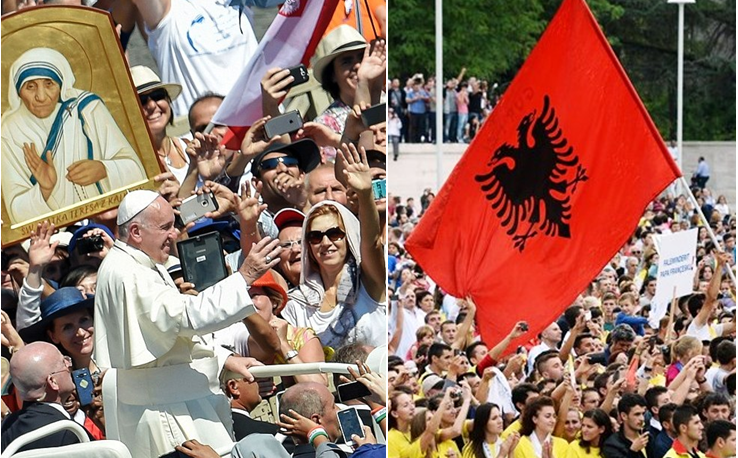 Mother Teresa, the tiny nun who cared for the world’s most unwanted and became an icon of the Catholic Church, was canonised at a ceremony in St Peter’s Square. Born Agnese Gonxha Bojaxhiu of Albanian parents in 1910 in what is now Macedonia, she became a nun aged 16 and moved to India in 1929, creating her first mission in 1950, report DailyMail transmete the National Information Agency “Presheva Jonë” Two supposedly miraculous cures have been attributed to Mother Teresa by the Vatican, paving the way for her sainthood.

Pope Francis presided over the morning Mass and called on the 100,000 pilgrims and tourists gathered in the square to ‘carry her smile in our hearts’. ‘For the honour of the Blessed Trinity… we declare and define Blessed Teresa of Calcutta to be a Saint and we enroll her among the Saints, decreeing that she is to be venerated as such by the whole Church,’ the pontiff said in Latin.

Speaking from the steps of St. Peter’s Basilica, Francis said Mother Teresa spent her life ‘bowing down before those who were spent, left to die on the side of the road, seeing in them their God-given dignity’.

‘She made her voice heard before the powers of the world, so that they might recognise their guilt for the crimes of poverty they themselves created.’

He added: ‘Mother Teresa loved to say, “perhaps I don’t speak their language but I can smile”.

The Pope is pictured arriving at Mother Teresa’s canonisation

‘Let us carry her smile in our hearts and give it to those whom we meet along our journey, especially those who suffer.’

Applause erupted in St Peter’s Square even before Francis finished pronouncing the rite of canonisation at the start of Mass, evidence of the admiration Mother Teresa enjoyed from Christians and non-Christians alike.

For the Pope, Mother Teresa put into action his ideal for the church to be a merciful ‘field hospital’ for the poorest of the poor, those suffering both material and spiritual poverty.

Yesterday he praised the care Mother Teresa had for the poor and the sick, while taking a swipe at world leaders for their ‘sin of indifference’ to suffering today.

‘Tomorrow, we’ll have the joy of seeing Mother Teresa proclaimed a saint,’ he said. ‘She deserves it!’

The pontiff decried those who ‘turn the other way not to see the many forms of poverty that begs out for mercy’.

Choosing ‘to not see hunger, disease, exploited persons, this is a grave sin. It’s also a modern sin, a sin of today,’ he told the gathered thousands.

Mother Teresa died in 1997 and was beatified – the first step towards becoming a saint – in 2003, after her first cure – of a woman with an ovarian tumour – was recognised by the Church.

Pope John Paul wanted to declare her a saint immediately, bypassing the beatification process, but was dissuaded by cardinals.

Her second ‘miraculous cure’ – of a man supposedly healed of a brain infection – was recognised last year, leading to her canonisation.

Throughout last night, pilgrims prayed at vigils and flocked before dawn to the Vatican under heavy security to try to get a good spot for the morning Mass.