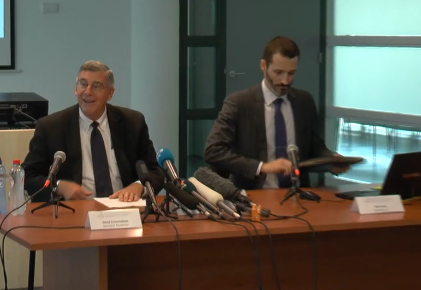 THE HAGUE, Netherlands –  The new chief prosecutor of an international effort to bring to justice those responsible for atrocities during Kosovo’s battle for independence has pledged to investigate “without fear or favor.”, press Agency “Presheva Jonë” reported

David Schwendiman, the chief prosecutor of the new Kosovo special war crimes court, said that the election of Hashim Thaci as the country’s president does not give him immunity from prosecution.

David Schwendiman, a former U.S. federal prosecutor who has also worked in Bosnia and Afghanistan, told reporters Thursday he is “aware of the political sensitivity of what I am doing,” but stressed “I will be guided only by the facts and the law.”

Schwendiman is investigating allegations made in a 2010 Council of Europe report that senior members of the Kosovo Liberation Army, including current Kosovo President Hashim Thaci, ran detention centers where civilian captives, including Serbs, were killed and their organs sold on the black market during Kosovo’s war for independence from Serbia. Thaci denies the claims.

The Kosovo Specialist Chambers and Specialist Prosecutor’s Office are part of the judicial system of Kosovo. The Chambers are attached to each level of the Kosovo court system. They were established by a Constitutional Amendment and a Law adopted by the Kosovo Assembly to conduct trials for allegations stemming from the 2011 Council of Europe report, which alleges serious violations of international law, SCP reported,  transmete the Press Agency “Presheva Jonë” .

They are of temporary nature with a specific mandate and jurisdiction, namely over certain crimes against humanity, war crimes and other crimes under Kosovo law which allegedly occurred between 1 January 1998 and 31 December 2000. The Law allows for relocation of the proceedings outside Kosovo. The Specialist Chambers have a seat in The Hague, the Netherlands, and are to be staffed with international judges, prosecutors and staff. More details on the background to the organization are available via About the SC and SPO. The appointment gives me the authority to prosecute cases arising out of the investigations carried out by the task force and by the newly established prosecutor’s office. I have looked forward to this day since I first arrived in Brussels to take over the task force from Ambassador Williamson in May 2015.

I have been deliberately silent since then because I wanted to focus my efforts on the investigation. My goal today is to let you hear how I view my role and responsibilities and, to the extent I can, to answer as many of your questions as possible in the time we have.

As some of you know, I was a prosecutor in the United States for over thirty years before I became an international prosecutor in Bosnia and Herzegovina.

I know from personal experience how painful and difficult investigating and prosecuting mass atrocity is; for those conducting them, but especially for those affected by the investigations and prosecutions. I know firsthand the time, effort and dedication it takes to do these kinds of cases.

I was chosen for this job because I have demonstrated the ability to conduct successful investigations and prosecutions of war crimes and crimes against humanity. I have experience leading a prosecutor’s office doing this kind of work. And, most importantly, I have a reputation for acting independently.

I intend to do this job the way I have always done things in the past; fairly, vigorously, and without fear or favor. I would not have accepted the appointment as the Specialist Prosecutor unless I believed there was a case to answer.

My responsibility now is to conduct myself and to pursue the investigation and prosecution of whatever charges I decide to bring independently and professionally. I will make decisions based solely on the facts we have and will continue to collect and our best reading of the law; not on whether what I decide to do has political, diplomatic or other implications or consequences. I am aware of the political sensitivity of what I am doing, but I repeat – I will be guided only by the facts and the law. Before I go further, let me first remind you what progress has already been made.

Avis Beneš,  spokesperson The Kosovo Specialist Chambers. She has thorough knowledge of political and governmental systems in the region, and a solid background in international relations, public administration, economics, law, comparative politics and European integration issues.  Ms. Beneš has participated in numerous conferences, and speaks Croatian, English, German and French.

Since it began its work, the Special Investigative Task Force has painstakingly collected evidence related to its mandate; not to vindicate the Council of Europe report, but to determine independently whether evidence exists to justify charging anyone with a crime.

Putting the means in place to formally address the issues raised by the investigation was the next step.

If you look back just one year, you will see that remarkable progress has been made in that regard:

In August 2015, a constitutional amendment and law were passed by the Kosovo Assembly making that possible;

An interim host state agreement between the Netherlands and Kosovo was concluded in January this year starting the process that allows all this to be done here in The Hague;

The administration for the new court the law created relocated to The Hague in April 2016;

The Special Investigative Task Force moved from Brussels to The Hague in June;

Things are steadily moving ahead, but more needs to be done, of course.

As we speak, we are hiring into the Specialist Prosecutor’s Office the best and brightest to add to our core of exceptional staff from the task force to build the team I need to take this all to the next level.

The European Union, the Netherlands, Kosovo, and the international community have expended great energy and resources to bring things to this point.

I am grateful we have the financial backing and support of the European Union, the Netherlands, the US, and the international community at large.

I am certain that support will continue.

My message is that no one should doubt that this is a very serious undertaking.

Let me take a minute and address some of the more obvious expectations and answer some of the questions that people have about the work of the prosecutor’s office.

When can we expect to see charges?

As I said, there is more to do, more to come, before everything is in place that will allow me to make formal charging decisions.

In the end, I will do what the evidence and the law compel me to do when we are ready – not a minute before; not a minute later.

I firmly believe that haste is no friend of justice, but neither is unnecessary delay.

I am committed, to the extent I can control it, that there will be no unnecessary delays when it comes to me discharging my responsibilities.

Speculation about any of this is just that – speculation – and it serves no legitimate purpose.

Who do you expect to charge?

You will know when someone is accused when an indictment or charging document accusing them is made public by the court if and when charges are confirmed.

In short, when it comes to speculation and reports purportedly coming from “sources close to the prosecution,” if it has to do with this investigation or any prosecution related to it, nothing you hear or read should be taken for truth unless it comes from me or the court when the time comes for the court to speak.

A word about my obligations as a prosecutor and as the chief prosecutor.

The constitutional amendment and the law that created the position I now hold make it very clear; I am independent.

I do not take instruction from anyone.

This is a legal, professional and personal commitment that I made freely when I accepted the position.

My professional duty is to authorize charges that are supported by evidence that is available and admissible at trial and is sufficient in quality and quantity to result in convictions when presented to a neutral and objective trier of fact and tested by a defense.

Any conviction must be legally sufficient so as to withstand appeal and it must be enforceable.

These are the international standards that govern what I do and I am committed to them.

One of my obligations as the chief prosecutor is to inform those who are interested in and affected by my work; primarily, to make sure to the extent I can that victims are regularly and appropriately informed about the progress of investigations and prosecutions affecting them.

I understand and I am determined to meet that obligation.

You are one of the most important means of getting information to those affected by all of this.

I respect what you do.

I believe a vigorous and free, responsible media is necessary to help ensure that the outcomes achieved by the Specialist Prosecutor’s Office and the court are legitimate and, equally as important, are perceived as legitimate by those they affect.

My job involves, among other things not compromising an investigation or prosecution by disclosing information that might be harmful to victims, witnesses, or indeed to an accused, except pursuant to rule or in court under the direction, supervision, and protection of the judges.

For this reason, I will not talk about our investigation, our means, our methods, or our sources, our findings or our conclusions.

To the extent I can, without compromising the investigation or any prosecution and without violating my professional and ethical responsibilities, I will be open with you.

I am fully committed to ensuring that victims are properly included when it comes to everything we do and that vulnerable victims receive all the support I am able to provide.

This is a legal, but also a moral obligation I take personally and seriously.

I am obligated to protect witnesses and to keep confidential and secure all information that should be protected to ensure that witnesses who give evidence are not intimidated or harmed or threatened.

This, too, is more than a legal obligation.

I will not discuss nor disclose information about our witnesses.

Neither will I discuss our means and methods for protecting those who are vulnerable because of their role in our investigations or any prosecution.

The law passed last year is very specific in the limitations it imposes on the jurisdiction of the Specialist Prosecutor’s office – it is the same for the Specialist Chambers.

Generally, my jurisdiction extends to the investigation and prosecution of:

Acts engaged in by individuals that relate to conduct addressed in the Council of Europe Report published in 2011;

Such acts committed by individuals between the beginning of 1998 and the end of 2000;

Such acts by individuals when they amount to a war crime or crime against humanity as defined by the 2015 law or by applicable customary international law;

And, acts affecting the integrity of the investigation or proceedings; that is, witness intimidation, perjury, etc.