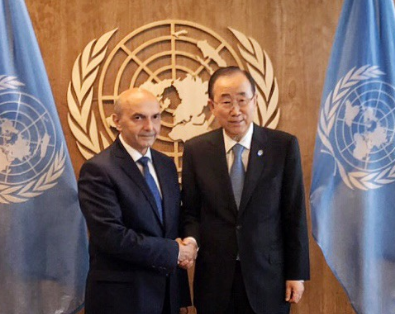 The Secretary-General Encouraged further progress in the EU-facilitated dialogue between Belgrade and Pristina, Stressing the importancia of fully Implementing Agreements reached to date.They all ongoing Discussed Efforts to strengthen the rule of law, Human Rights and protect cultural and religious heritage, Facilitate inter-community and Reconciliation.

The Secretary-General called upon the Kosovo Authorities to Closely cooperate with his Special Representative in Kosovo, Mr. Zahir Tanin, Head of the Interim Administration Mission in Kosovo (UNMIK), to address These common Objectives.

The Press Agency  “Presheva Jonë” that he has learned this meeting with the UN chief is already talking about the current Situation in Kosovo, the Kosovo-Serbia dialogue for Asaocianin Serbian Municipalities, specialen debates and demarcation. About These last two topics is not pronocuar UN chief.