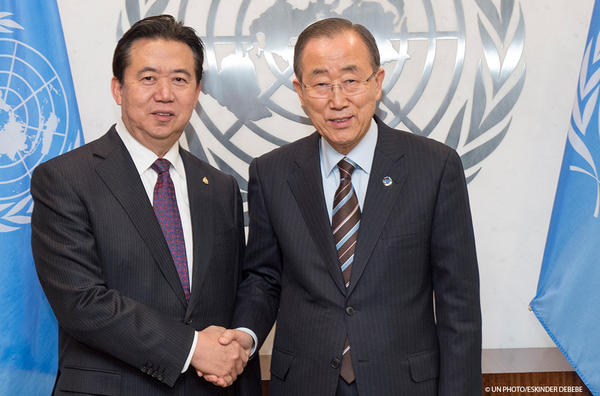 Discussions focused on INTERPOL’s global programmes on countering terrorism, organized and emerging crimes and cybercrime within the context of the UN’s Sustainable Development Goals.

“Against a backdrop of evolving complex threats and global security, the need and potential for cooperation between the UN and INTERPOL on global security remains as essential as ever,” said President Meng.

“INTERPOL and the United Nations have a long history of cooperation and we will continue in our joint efforts for a safer world for all citizens,” added the President.

The meeting follows the adoption of a UN General Assembly resolution in November which calls for enhanced cooperation between the UN and INTERPOL in tackling terrorism, including preventing foreign terrorist fighter travel, and combating all forms of transnational crime.

INTERPOL has a long history of cooperation with the United Nations, which was formalized in a Cooperation Agreement in 1997. The opening in 2004 of the Office of the Special Representative of INTERPOL to the United Nations in New York has also strengthened the relationship and helped streamline the cooperation between the two organizations.

During his mission to New York, President Meng will also meet with incoming UN Secretary General António Guterres, who begins his mandate on 1 January, 2017.