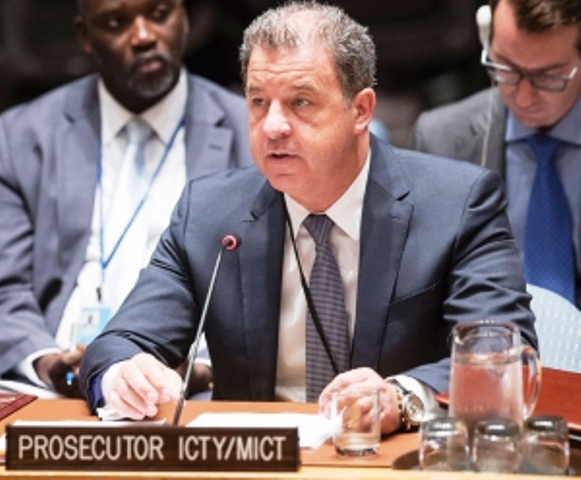 Prosecutor Serge Brammertz today addressed the United Nations Security Council (UNSC), presenting the Office of the Prosecutor’s (OTP) 25th completion strategy report, covering the period from 16 November 2015 to 15 May 2016. In his address the Prosecutor updated the UNSC on the Tribunal’s final trials and appeals, state cooperation with the Tribunal and regional cooperation in war crimes prosecutions in the countries of the former Yugoslavia.

The Prosecutor began by discussing the status of the Tribunal’s final trials and appeals, noting that closing arguments in the Mladić case are expected to be presented this autumn, and that the OTP had recently filed a motion for the termination of the proceedings in the Hadzić case.

Echoing the Tribunal’s President, the Prosecutor informed the Security Council that Serbia has failed for a year and a half to execute the Tribunal’s arrest warrants for three individuals indicted for contempt. He noted that in this final phase of the Tribunal’s work, state cooperation remains essential to enable the completion of the Tribunal’s mandate.

The Prosecutor further informed the Security Council that the positive trend in regional cooperation in war crimes “appears to be reversing”. “Too many politicians and public figures are denying well-established truths, enflaming ethnic tensions and repeating nationalistic slogans of the past.” As Prosecutor Brammertz noted, while there have been many positive developments in national war crimes justice and regional cooperation, the political situation throughout the region is moving in the opposite direction.

Prosecutor Brammertz concluded by confirming that the transition of responsibilities from the ICTY to the MICT continues as foreseen in Security Council resolutions. He further stated that the OTP will continue to monitor and support national courts prosecuting war crimes committed in the former Yugoslavia, and expressed his conviction that “to support national war crimes justice efforts, it is important that we disseminate our experiences and lessons learned.”