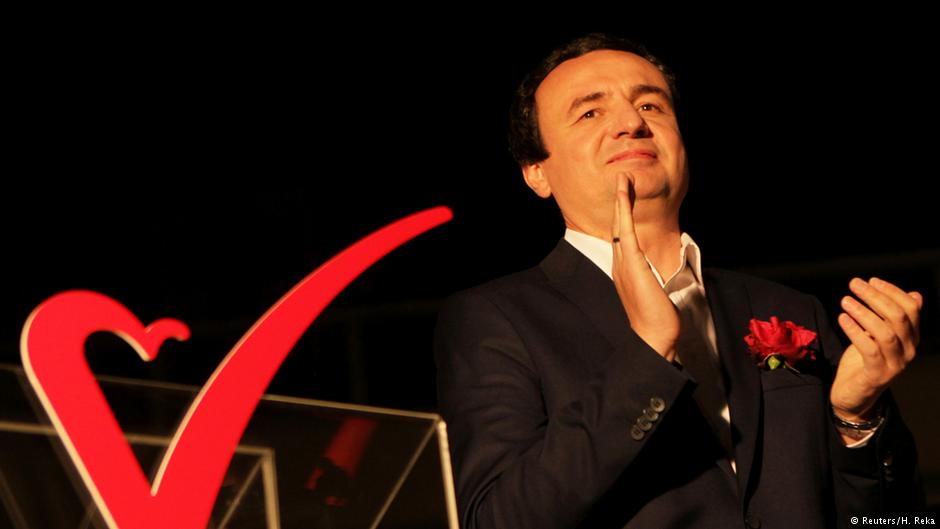 The party has nominated its former leader, 42-year-old Albin Kurti, as candidate for prime minister. The opposition Vetevendosje (VV) party 26.3%

Nearly complete results in Kosovo’s national election are showing that a coalition of ethnic Albanian former leaders of a war of independence against Serbian troops in 1998-1999 is leading with a third of the vote.

The Central Election Commission reported mid-afternoon Monday that the ex-rebels’ coalition came in first with around 34 percent of the vote. With almost 98 percent of votes counted, the nationalist Movement for Self-determination had about 27 percent, a point ahead of a coalition led by former Prime Minister Isa Mustafa.

No group can govern alone and a coalition is likely.

Final results for the new 120-seat parliament are expected later in the week. Twenty seats in parliament are reserved for ethnic Serbs and other minorities.

Commission head Valdete Daka said that due to “heavy traffic of more than 2 million clicks” the institution’s webpage was temporarily blocked Monday morning. She added that officials are working to produce final results, likely later this week. Ramush Haradinaj, 48, the leading coalition’s nominee to be prime minister, told supporters at a midnight rally in Pristina that “we know that there is a lot of work ahead of us. But we are going to achieve it together.”

The party has nominated its former leader, 42-year-old Albin Kurti, as candidate for prime minister.. With 70% of votes counted, the alliance dubbed the “war wing” by Kosovo’s media, and led by the Democratic Party of Kosovo (PDK) of President Hashim Thaci had 34%, the opposition Vetevendosje (VV) party 26.3%, and a coalition led by the Democratic League of Kosovo (LDK) 25.8%, the Democracy in Action non-governmental organisation said. The Movement for Self-determination also celebrated the results, which saw the party double its share of the vote. The party has been a disruptive force, releasing tear gas in the previous parliament while its supporters threw firebombs outside to protest contentious deals with Montenegro and Serbia.

Serbian President Aleksandar Vucic said the victory of hard-liners in the Kosovo elections will create “a lot of difficulties and problems,” but added that the European Union-mediated dialogue with Kosovo must continue.

The Serbian leaders consider Haradinaj a war criminal and failed to get him extradited earlier this year from France where he was detained on a Serbian arrest warrant.

Serbia does not recognize Kosovo’s 2008 declaration of independence

EU Enlargement Commissioner Johannes Hahn said he hopes that Kosovo’s representatives understand that “a future perspective, in terms of more and better living conditions, is only achievable embedded into the European Union.”

“It’s now the responsibility of political leaders in the country to form – very fast hopefully – a new government … it’s so important for this country to stay committed to the reforms.”

Any government will face a number of thorny issues, including approving a border demarcation deal with Montenegro Brussels insists Kosovo’s parliament must approve the deal signed in 2015 as a condition for adding Kosovo to western Balkan countries whose citizens don’t need visas to enter the EU’s Schengen zone.

A further issue is the prospect of former ethnic Albanian senior rebel commanders facing prosecution in the newly established war crimes court. The court in The Hague is expected to shortly issue indictments for crimes committed against civilians during and after the 1998-1999 war with Serbia.