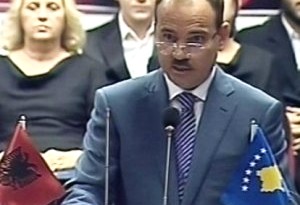 Albanian President, Bujar Nishani has promised that during his mandate as President, Kosovo will be his main priority for increasing of recognitions. He has supported the dialogue between Kosovo and Serbia as two sovereign countries to resolve certain issues, while has reaffirmed once again the stance of Albania that issue of Kosovo borders is a closed issue.

Albanian President made these comments Thursday in the presence of members of the Assembly of Kosovo, where on the occasion of his visit to Kosovo was organized a solemn session.

On his visit, Nishani will be accompanied by first lady Odeta Nishani, Minister of Education Myqerem Tafaj, Minister of Interior Flamur Noka and the Deputy Foreign Minister Edit Harxhi.

Nishani is expected to pay homage to Kosovo’s late President and independence leader, Ibrahim Rugova, and to the late guerrilla leader, Adem Jashari.

He is also expected to visit several religious sites, including the medieval Serbian Orthodox monastery at Decani, in the west of the country.