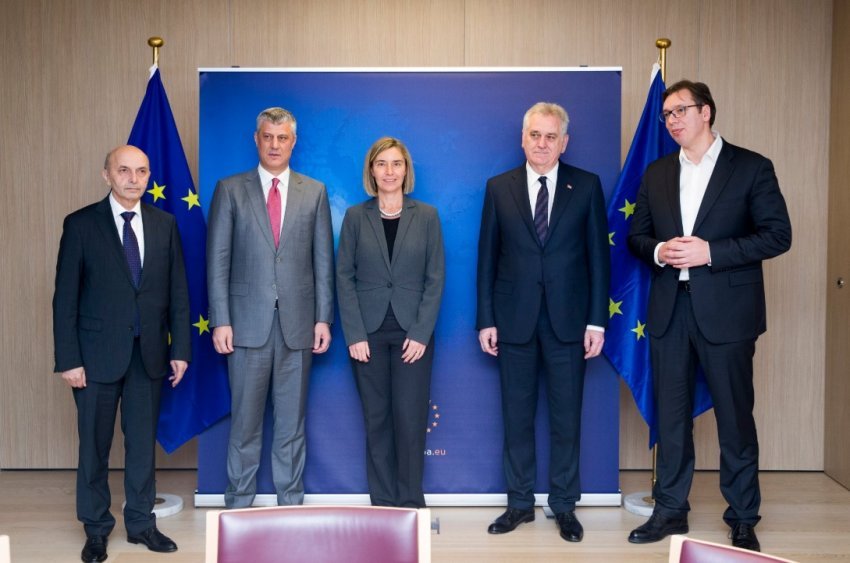 Brussels, 24 January 2017 -Statement by High Representative/Vice-President Federica Mogherini following the high level meeting in the framework of the EU-facilitated Dialogue between Belgrade and Pristina, report  press EU, transmete the Press Agency “Presheva Jonë”
Today, Presidents Tomislav Nikolić and Hashim Thaçi and Prime Ministers Isa Mustafa and Aleksandar Vučić joined me for a high level meeting of the Dialogue for normalisation of relations between Belgrade and Pristina.
I would like to thank them for the open and very constructive meeting we had. They discussed the developments over the past days, agreed to leave the tensions behind and to focus on the work ahead.
I underlined that progress in the normalisation of relations between Kosovo and Serbia is essential: for Kosovo and Serbia, for the European Union itself, and the Western Balkans region as a whole. Advancing in the Dialogue is key for both sides in moving forward on their respective paths towards the European Union.
I am encouraged by the leadership, vision, commitment and engagement shown by the political leaders today to address and solve issues of mutual concern through the Dialogue.
Both sides agreed to take the Dialogue forward in a spirit of respect, cooperation and mutual understanding. Discussions between the sides will intensify over the next days. We decided to have a series of rounds of the high level Dialogue, starting from the coming days.
I want to thank once more the Presidents and Prime Ministers for their openness and their strong commitment to the Dialogue. We will now take the agreed work forward constructively and concretely for the benefit of all people in Serbia and in Kosovo, advancing concretely on their European paths.
I as a facilitator of the Dialogue will continue to be constantly personally involved in supporting the full implementation of today’s outcome, of agreements already reached and of further progress in normalisation of relations between the two sides.