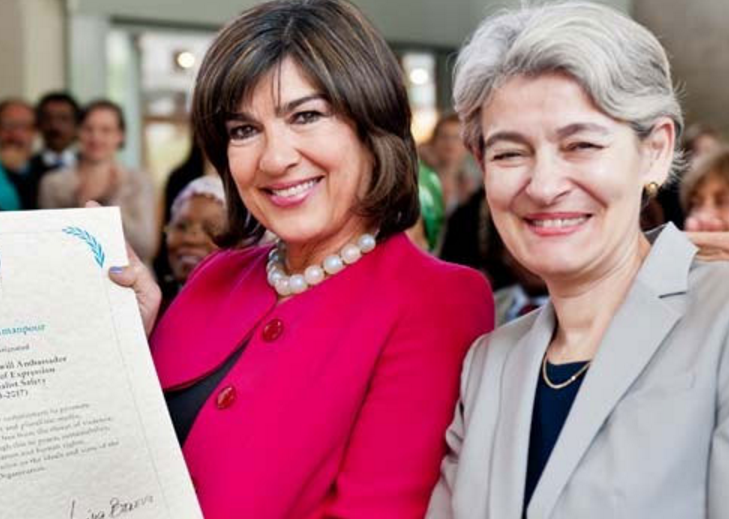 Paris, 9 May—The UNESCO Director-General Irina Bokova and Christiane Amanpour, UNESCO Goodwill Ambassador for Freedom of Expression and Journalist Safety, reviewed the success of this year’s main World Press Freedom Day event, held in Helsinki, on 3 May,  report  UNSCO ,  trasnmete the National Information Agency “Presheva Jonë”
This largest ever World Press Freedom Day international conference brought together 1,100 experts, officials and journalists from across the world, to stand together for freedom of expression and press freedom.
On this occasion, the 2016 UNESCO/Guillermo Cano World Press Freedom Prize was awarded to Khadija Ismayilova, from Azerbaijan, jailed since 2014. Created by UNESCO in 1997, the prize honours a person, organization or institution that has made an outstanding contribution to the defence and/or promotion of press freedom anywhere in the world, and especially when this has been achieved in the face of danger.
When the UNESCO/Guillermo Cano World Press Freedom Prize was previously given to a journalist in prison, the high visibility and support provided by UNESCO always brought about their release. This was the case for the previous winner Mazen Darwish, President of the Syrian Center for Media and Freedom of Expression, 2015 Prize laureate, now released, who was able to attend the conference in Helsinki.
In this spirit, Irina Bokova and Christiane Amanpour hereby repeat their call to the government and authorities of Azerbaijan for the immediate release of Ms Khadija Ismayilova from prison.