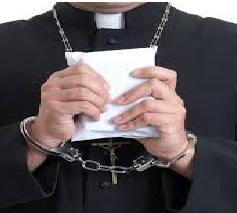 Laurence Soper, 72, was due to appear at a west London court later on Monday to face charges for crimes he is accused of committing from 1972 to 1986. He was arrested at Luton Airport on Sunday after he flew back to Britain.

He faces nine charges in total, according to a police statement, which said there were five victims.

Described by police as a monk, Soper had lived in the town of Peja in Kosovo for about five years under the name Andrew Charles Kingston. British media said the former abbot from Ealing, west London, who was a teacher in the 1970s and 80s, had jumped bail in 2011.

Kosovan authorities detained Soper on an international arrest warrant in May but two extradition requests were rejected by courts in the country, the second because the crimes were committed too long ago.

Police in Kosovo told Reuters that Soper had exceeded the time limit of his stay in the country and had been deported.

A Catholic monk has been returned to Britain from Kosovo following a five-year police manhunt and charged with a string of historical sex offences.

Father Laurence Soper is accused of abusing five boys as young as 14 between 1972 to 1986.

The nine charges include offences of buggery, gross indecency and indecent assault.

The 72-year-old was arrested as he arrived at Luton Airport on Sunday by officers from Scotland Yard’s Sexual Offences, Exploitation and Child Abuse Command.

Soper, who was detained under a European Arrest Warrant in Kosovo in May, will appear at Ealing Magistrates’ Court today.

Four of the charges, including buggery, gross indecency and indecent assault, relate to a single alleged victim and date from February 17, 1972 to February 18, 1976.