The dissatisfaction of the Albanians living in the three towns of East Kosova (Southern Serbia) Presevo, Bujanovac and Medvedja does not date from yesterday. A 1946 decision by the Yugoslav government to separate these three municipalities from Kosovo and place them under direct Serbian Republic jurisdiction was the beginning of the ethnic tension.

Serbian President Boris Tadic stated that the Albanian aspirations for territorial and political autonomy of southern Serbia “could by no means be taken seriously” because the sole subject of the negotiations will be the future status of Kosovo.

It seems as though the Albanians of southern Serbia are “blackmailing” the Serbian authorities: Their demand for political and territorial autonomy will be more radical only if Serbia manages to divide Kosovo at the end of status negotiations. In this case, the Presevo Valley will be the compensation for northern Kosovo. Will Serbia face a second Kosovo? How further will the Serbian land disintegrate?

The dissatisfaction of the Albanians living in the three towns of Southern Serbia, Presevo, Bujanovac and Medvedja does not date from yesterday. A 1946 decision by the Yugoslav government to separate these three municipalities from Kosovo and place them under direct Serbian Republic jurisdiction was the beginning of the ethnic tension. In 1974 when Kosovo had been granted autonomy the status of these three towns did not change. In March 1992, during the period of the nationalist fire igniting the former Yugoslavia, the Albanians held an unofficial referendum in which they voted nearly unanimously to re-attach the Presevo Valley to Kosovo.

The Albanians of southern Serbia are culturally and economically identical to those of Kosovo. The two Albanian communities speak the same dialectic (Gheg) and they have close relations with one another. Besides, this neighbourhood with Kosovo makes the assimilation of the Albanians of southern Serbia very problematic. In fact, there are not much Serb in the area to be assimilated with. Except Medvedja, the Albanians form the majority: in Presevo 90 percent of the population and in Bujanovac 54.5 percent (2002 census). In sum, nearly 70.000 Albanians live in the region. 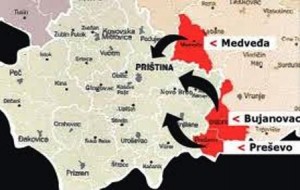 The year of 2000 was not a coincidence. It was just after the Kosovo war and the NATO intervention. The Western powers, which watched the war in Bosnia inert for a long time, decided to intervene in Kosovo as soon as possible. Yet NATO, which did not know the terrain, needed an ally for land operations. That ally was the Kosovo Liberation Army (UCK), which was once classified as terrorist organisation by CIA. That was a dangerous precedent: In time of emergency, NATO may intervene and resort to controversial organisations for help. Between 2000 and 2001, the UCPMB, which was organised according to the UCK model, tried to create this “emergency”. The aim was to “liberate” the Presevo Valley re-baptised as “eastern Kosovo”. After Tirana denounced the “Greater Albania” project, the UCPMB opted for a “Greater Kosovo” project. It is known that the UCPMB was financed by the Kosovo People’s Movement, which once created the UCK. Between 700 and 1000 UCPMB guerrillas had great margins to operate. In June 1999, a buffer area called the “Ground Safety Zone” (GSZ) was created within Serbia along the entire administrative boundary with Kosovo. Five kilometres deep, this demilitarised zone was to separate the Yugoslav military and police forces from the NATO forces in Kosovo (KFOR). The UCPMB exploited the eastern section of this safety zone, adjacent to the Presevo Valley, to use as a base for launching attacks on the police and other targets.

The Albanian guerrillas’ bid to “liberate” southern Serbia came up against with two major obstacles. First, the situation in southern Serbia was not similar to that in Kosovo under Milosevic pressure. Unlike Kosovo, whose autonomy was flagrantly violated by the Serbian administration, southern

Serbia had no special status within Serbia. Secondly, on the 6th of October 2000 Milosevic was replaced by the democrat Vojislav Kostunica. By the December general elections, which resulted with the victory of the democrats, Serbia was no longer the threat that it used to be under Milosevic regime. Besides, Serbia, which opted for moderation and negotiation regarding the problem in its southern region, gave the UCPMB no opportunity to justify their illegal activities. 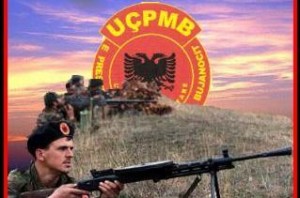 In 2000, the general dissatisfaction turned into an open unrest. The Liberation Army of Presevo-Medvedja-Bujanovac (UCPMB) made its first appearance during the funeral of two Albanians killed by the Serbian police in Dobrosin (a village near Bujanovac) on the 30th of January 2000. The Albanian insurgency was to last for 16 months. Between March and May 2001, following intense NATO and US-led diplomacy, the international community brokered a peace agreement between the Albanians and Serbs that led to the disbanding of the UCPMB (Konculj Agreement), the re-entry of Serbian security forces into the GSZ, and the creation of the Covic Plan, which takes its name from the former Serbian Deputy Prime Minister Nebojsa Covic. The Plan brought significant international and domestic investment into the region. It envisioned to create a multi-ethnic force and to integrate the Albanians into public institutions. The new municipal elections were held on the 28th of July, 2002. The Albanian Party for Democratic Action (PDD) won in the municipalities of Presevo and Bujanovac, while a Serbian coalition won in Medvedja.

However the key for an everlasting peace was the economic reform.

Along with Kosovo, southern Serbia was one of the poorest regions in the former Yugoslavia. Unfortunately the Covic Plan could not change the economic gloom in southern Serbia. The region is chronically poor and underdeveloped. The job opportunities are few. Therefore there is no wonder that without economic growth, there could be no hope for lasting peace.

Although multi-ethnic police units were formed, a visible Serbian gendarmerie and army presence offended the Albanians. In 2002, a Serbian military base was built between Presevo and Bujanovac as an ultimate provocation. Since November 2003, the army of Serbia-Montenegro has reinforced its presence in the region. The education reform and the integration of Albanians into the judiciary and other public organs remain disappointing. In a region where the ethnic hatred is transferred from generations to generations, the lack of educational reforms and effective integration efforts is indeed fatal.

Although in August 2003 eight separate attacks, many against the army and moderate Albanians, broke two years of relative calm, so far the region remained relatively peaceful and calm.

The final status negotiations for Kosovo began on the 20th of February this year. It seems that this time the Albanians of southern Serbia are prepared to play political chess. On the 14th of January, 61 of the total 66 council members from Bujanovac, Presevo and Medvedja adopted a statement “respecting the will of the citizens to define the Presevo Valley as a constitutional and territorial region”. With this document the Albanians demand decentralisation in the administrative, judicial, education, healthcare, culture and economic development spheres. They want the establishment of a border police and the withdrawal of the Serbian Army and police from the region. They ask to be released from the obligation to serve in the army of Serbia-Montenegro. The Albanians also demand a proportionate participation in the local government and free use of their national symbols. According to them, the Presevo Valley must have special relations with Kosovo, including the possibility of joining Kosovo on the basis of the 1992 referendum. If Serbia refuses to take to these demands into account, the “southern Serbia problem” must be resolved in the framework of parallel talks during the final status negotiations.

These demands are of course too much for Serbia. Serbian President Boris Tadic stated that the Albanian aspirations for territorial and political autonomy of southern Serbia “could by no means be taken seriously” because the sole subject of the negotiations will be the future status of Kosovo.

American Ambassador to Serbia-Montenegro, Michael Polt agreed with Tadic: “Kosovo is the question of questions”. However, it is known that during last year representatives of the Albanian parties from southern Serbia visited Pristina several times while the document was being prepared. So, Pristina and the Presevo Valley are in close cooperation in this new evolution. What is the purpose of playing with fire?

As far as Kosovo is concerned, it is known that Belgrade wants an autonomous Serb entity with strong ties to Serbia. As to the Albanians, they claim that this means partition of Kosovo. The two Albanian communities may be anxious that the international community, which is determined to resolve the Kosovo issue within the year, rush and make some unpleasant concessions to Serbia. In this case, “blackmailing” Belgrade will be the best remedy. Politicians from Pristina and Presevo expressed themselves very clearly: “Our demands will be more radical if only Kosovo is divided”. Coordinator of the Kosovo Albanian negotiation team, Bljerim Salja stated: “If Kosovo is divided, which means the annexing of its northern part by Serbia, “eastern Kosovo” covering up Bujanovac and Presevo must belong to Kosovo”. It seems that the “Greater Kosovo” project now prevails over the “Greater Albania” project.

The message is clear: if Serbia does not want trouble at home (the Presevo Valley), it would better accept the independence of Kosovo. In a more diplomatic way and without using the word “blackmail”, Boris Tadic pointed out that a political competition is in question, which seeks to utilise southern Serbia in the negotiations over the Kosovo’s status by linking the stability of this region with the future of Kosovo. It is known that the international community does not support the Albanian demands. Yet to speculate whether they would use it as a mean for exerting political pressure on Belgrade in the long run in order to force the hand of Serbia to the independence of Kosovo would be indeed interesting.

As the status talks have begun in Vienna, diplomats warn of a backlash in Serbia where nationalists insist that the government must “declare Kosovo occupied territory” if it secedes with Western backing. The Serbian government, which has a slim working majority in Parliament, may call early elections this spring. The disaster scenario would be the victory of Serbian nationalists during these early elections. This would trigger off a second Kosovo catastrophe. The worst-case scenario would be the Serbian crackdown on its southern region just as in Kosovo in 1998-1999.

Of course, the probability of the materialisation of this scenario is not even one percent, all the more as Serbia is now determined to join the European Union. The Presevo Valley is not Kosovo – and Boris Tadic is not Slobodan Milosevic. The situation in southern Serbia, how grave it may be, is not similar to that in Kosovo during 1998-1999. And the Albanians of southern Serbia, who did not support the UCPMB as a whole as the Kosovo Albanians supported the UCK, certainly will not approve of the use of violence to resolve their problems.

Yet, the fact that some political actors in the region try to keep southern Serbia a crisis zone shows what a dangerous precedent Kosovo actually was. Orhan Rexhepi, President of the Democratic Party of Albanians stated: “Ambassador [Michael] Polt personally recognised the existence of the problem in southern Serbia. This problem must be resolved”. Even this statement proves that the Albanians of southern Kosovo, though prudently, try to internationalise their internal problems.