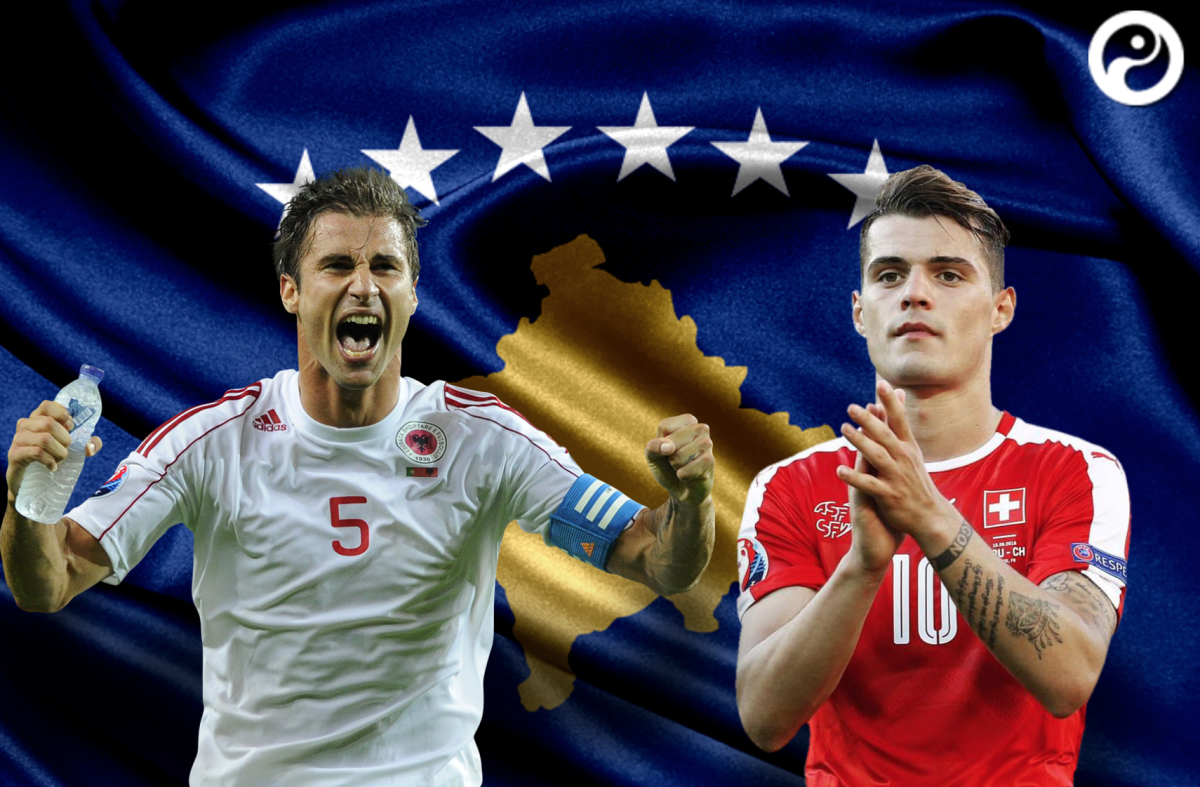 There will be a new team competing for a place at the 2018 World Cup in Russia after Kosovo were officially approved as a Fifa member in June.  Euro 2016 teams Switzerland and Albania could be particularly vulnerable to losing players to Kosovo as this potential XI demonstrates, report Squawka, transmete the National Information Agency “Presheva Jonë” in Geneva.

After declaring their independence from Serbia back in 2008, Kosovo have finally been recognised by both Uefa and Fifa after years of lobbying for the right to have their own football team.
Having competed in a few friendlies over the past few months, the serious business will kick off in earnest in September, as Kosovo will attempt to navigate their way through an extremely competitive group in order to reach the World Cup.
Standing in the way of an inaugural tournament qualification is Croatia, Iceland, Ukraine, Turkey, and Finland.

A factor that could aid their hopes of upsetting the aforementioned teams could lie in the players that they could attract as a number of stars are eligible to turn out for Kosovo even if they have had played competitively for another nation.
Euro 2016 teams Switzerland and Albania could be particularly vulnerable to losing players to Kosovo as this potential XI demonstrates.

Samir Ujkani was one of the first players to pledge his allegiance to Kosovo, making the switch from Albania in order to represent the country of his birth.

The talented goalkeeper, who has spent his entire professional career in Italy, will lead his side in their historic World Cup qualifying campaign after being appointed captain by their coach Albert Bunjaki.

The older of the Xhaka brothers. Taulant and Granit made European Championship history earlier this month when they lined up on opposing sides in the Albania versus Switzerland Group A clash.

While not as highly-rated as his brother, Taulant has forged a successful career for himself with Switzerland’s most dominant team FC Basel after rising through their youth ranks. He also represented Switzerland at youth level.

A well-travelled and respected defender, Lorik Cana would certainly have a decision to make if Kosovo came calling as he has just announced his retirement from international football, after serving as Albania’s captain.

Like Taulant Xhaka, Cana also participated at Euro 2016 but the former Sunderland, PSG, and Marseille man didn’t enjoy the best of times after being sent off in their historic opening game against Switzerland.

A Swedish youth international, Loret Sadiku progressed through the youth academy at Helsingborg before moving to Turkish football to join Mersin last year.

Like Ujkani, he has already linked up with the Kosovan national team, playing four times.

After bursting onto the scene as an 18-year-old during the 2013/14 season, Adnan Januzaj found himself at the centre of an international tug-of-war with Kosovo, Serbia, Albania, and Belgium all vying for his talents.

Following months of speculation, Januzaj eventually opted for the Belgian national team and he went on to feature in the Red Devils 2014 World Cup campaign.

The Manchester United winger’s early promise has faded somewhat over the past couple of seasons but nevertheless he would be a valuable addition to the Kosovan setup.

Strangely, Almen Abdi has been largely ignored by Switzerland since earning his first cap in 2008, featuring just six times for the country where he grew up.

Born in Kosovo, Watford’s midfield schemer and free-kick specialist could perhaps be tempted to switch national teams in the future in order to enhance his prospects of international football.

A mainstay and current vice-captain of the Swiss national team, Granit Xhaka would undoubtedly be one of the biggest coups for Kosovo given his current standing in the game.

After starring in a four-year spell with Borussia Monchengladbach in the Bundesliga, Xhaka became Arsenal’s third-most expensive player in history, joining for a £30m fee in May.

The ball-playing midfielder enjoyed an excellent Euro 2016 campaign but ended it on a low after his missed penalty against Poland cost Switzerland the chance to progress to the quarter-finals.

The well-travelled midfielder is a veteran on the international stage having amassed over 60 caps for Switzerland since making his debut way back in 2005.

Currently plying his trade with Watford in the Premier League, Behrami has enjoyed a successful career that has seen him take in stints across Itay with Genoa, Verona, Lazio, Napoli, and Fiorentina as well as Hamburg in Germany and West Ham.

Yet another player who could swap Switzerland for Kosovo is the highly-rated Bayer Leverkusen winger Admir Mehmedi, whose international experience is considerable given his age.

Known for his quick feet and ability to find the net, Mehmedi was one of the shining lights for Switzerland at Euro 2016, starting in all four of their games and scoring a thumping finish against Romania.

Xherdan Shaqiri caused a stir earlier this month when he suggested he could switch his international allegiance to Kosovo, after being overlooked by Switzerland for the vice-captaincy role.

His would be a huge loss for the Swiss as he has become the fulcrum of their team after emerging as one of Europe’s brightest talents as a teenager. A prolific goalscorer at international level, Shaqiri scored arguably the goal of Euro 2016 so far by netting an audacious bicycle kick in Switzerland’s loss to Poland in the last 16.

Yet to really establish himself internationally, Shani Tarashaj will be plying his trade in the Premier League with Everton next term after agreeing to join the Toffees midway through last season from Grasshoppers.

Technically adept enough to play as an attacking midfielder or central striker, Tarashaj was part of Switzerland’s Euro 2016 squad, although he failed to see any game time in France.