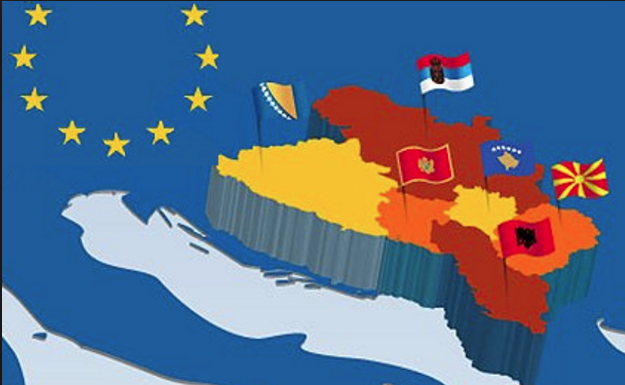 PRESEVO (AP) — Albania, Kosovo, Serbia, Montenegro, Macedonia, Bosnia all at different stages in joining the EU, have declared that the British exit in a referendum last week will not diminish their membership efforts. But their leaders have acknowledged that the weakened EU may not be as appealing as it used to be, report AP, transmete the National Information Agency “Presheva Jonë” .

When Britain voted to leave the European Union, pro-Russians in Serbia were quick to proclaim the bloc’s death: they lit candles and laid flowers in front of the EU headquarters in Belgrade and declared the country’s efforts to join the 28-nation club null and void.

Although the mock death certificate published by a Kremlin-backed group may be a bit premature, Serbia and other Balkan nations that suffered through wars and violent breakups of their states in the 1990s will certainly now face more hurdles and delays to their membership bids as the EU itself is falling apart.

It was the promise of Eastern expansion, championed by Britain, that helped halt the brutal 1990s wars among former Yugoslav republics. With the EU membership prospect now diminishing and the EU facing internal strife, the volatile Balkan region bordering the EU could now fall prey to power players such as Russia.

Albania, Kosovo, Serbia, Montenegro, Macedonia, Bosnia all at different stages in joining the EU, have declared that the British exit in a referendum last week will not diminish their membership efforts. But their leaders have acknowledged that the weakened EU may not be as appealing as it used to be, report AP, transmete the National Information Agency “Presheva Jonë” .

“This is the biggest political earthquake since the fall of the Berlin wall,” Serbian Prime Minister Aleksandar Vucic said. “There is no doubt that this will leave significant consequences not only in short but in long terms. What will the EU enlargement policy be I cannot tell you at this moment.”

On Thursday, the EU further delayed formally opening accession talks with Serbia — a move described by Serbia’s Foreign Minister Ivica Dacic as “shameful, incomprehensible and humiliating.” Dacic — who has close ties with Moscow — said in a strongly-worded statement that the EU decision amounted to “open political pressure” and called for urgent government consultations on future foreign policy strategy.

Serbia, strategically important for Russia as it remains its only real ally in the region, has faced relentless propaganda and political pressure from the Kremlin to ditch its pro-Western alliances. Russian officials have demanded that referendums be held in Serbia on its EU and possibly NATO bids, counting on strong historic ties between the two Slavic nations.

“The Brexit is not good news for the countries in the region, especially Serbia which has the closest ties to Russia,” said Jelica Minic from the European movement for Serbia, adding that the latest polls show that Serbs are largely Euro-sceptics and increasingly turning toward Russia. “Serbia is dangerously sliding toward Russia,” she said.

Moscow has also been very active in Bosnia, working through the Bosnian Serb mini-state there whose officials have been blocking the country’s Muslims and Croats from their efforts to join the EU and NATO.

For years membership in the EU was seen by many in Bosnia as a goal that would bring some stability in people’s lives, but the rupture in the EU brings back bad memories of the Yugoslav tragedy.

“This is not going to end well. I see nothing good in the future,” said Sarajevan Zuhra Coric, referring to the British exit.

Bosnian political analyst Ivana Maric believes what is happening now in the EU could have a positive effect as Britain has never been completely integrated and the Union may come out of this more “connected.”

“What happened to the pound will discourage other forces in Europe who considered similar referendums,” she said, referring to the drop of the British currency on the exchange markets immediately after the referendum. “However, the enlargement process may be delayed.”

Macedonia has been an EU candidate member since 2005, but its bid has been blocked by Greece over the name dispute.

Macedonian president Gjorge Ivanov expressed “great concern” with Brexit and said he fears that the EU may now split up with more of its member states leaving.

“We, who are older generation, experienced the tragedy of the former Yugoslavia, where there was also a system of collective decision-making. Where is that state now? We are worried by the possibility that the European Union may follow the same road,” Ivanov said.

In the Serbian capital, the pro-Russians were gloating.

They stuck a death notice to the entrance of the EU office, with a note: “We are informing the citizens of Serbia that after a long and serious illness, the European Union died at the age of 59.”