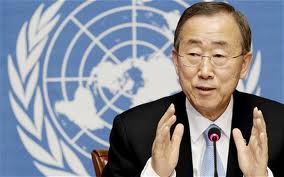 Secretary-General of the United Nations Ban Ki–Moon in an interview for  “Presheva Jonë”, the National Information Agency,

Ban Ki-Moon: The UN will continue to support efforts to create the appropriate conditions for the resumption of this dialogue process

Presheva Jone:  Mr. Secretary-General, the United Nations Mission in Kosovo, UNMIK, has been in place for 10 years. Do you think it has achieved its objectives of maintaining peace and stability in the region? After 10 years of international presence (through UNMIK, EULEX and KFOR) in Kosovo, what is your assessment of the situation in the region? Sec. Gen. Ban Ban Ki-Moon: The role of UNMIK since its deployment in 1999 has been key to fostering democracy and reconciliation, as well as to the maintaining peace and stability in the region. With limited exceptions, and despite significant challenges, the situation on the ground has remained peaceful. Both as an interim administration and also following its reconfiguration, UNMIK has created conditions for the people on the ground to live normal lives and to start building a better future for themselves. However, the work of the international community, including UNMIK, is not finished: more needs to be done to build greater confidence, promote reconciliation and encourage the resolution of differences between Pristina and Belgrade and also between communities on the ground, so as to support the long-term economic development and prosperity of the region.

Presheva Jone:  Three years after proclaiming its independence, Kosovo is recognized by 86 countries, including the US, most of the members of the EU and Switzerland.  Do you think that it will soon become a Member of the United Nations?

Sec. Gen. Ban Ki-Moon: This is a question for the UN Member States to consider.

Presheva Jone:  Do you think that the “technical talks” in Brussels between Kosovo and Serbia will bear fruits?

Sec. Gen. Ban Ki-Moon:   The EU-facilitated dialogue has already borne fruit, as a number of agreements have been reached in areas characterized by longstanding disagreements such as the customs stamps, diploma certification and civil registry issues. It is important that the sides continue to demonstrate confidence in the dialogue and engage with good faith, so that further agreements can be reached and progress is also made in the implementation of agreements reached thus far. The United Nations will continue to support efforts to create the appropriate conditions for the resumption of this dialogue process, which appears to be stalled following the recent developments in northern Kosovo.

Presheva Jone:  The problem of the North of Mitrovica remains of concern. Does the United Nations, and the international community, have a strategy to solve the problem of this city, which is neither fully at peace nor at war?

Sec. Gen. Ban Ki-Moon: The longstanding issues, related not only to northern Mitrovica but to the entire northern part of Kosovo, probably constitute the most sensitive challenges faced by the international community in Kosovo today. They cannot however be viewed or resolved outside the context of other issues related to Kosovo and the region. I have stressed that these sensitive issues can only be resolved through peaceful means, taking into account the views of the communities on the ground. While divisions in the international community regarding the issue of the Kosovo status continue to affect efforts made by the United Nations and other international stakeholders, we should continue to work together to encourage all sides to demonstrate patience and engage in good faith dialogue, so as to find appropriate solutions that can ensure sustainable peace in the region.

Presheva Jone:   What are your views on the report by Dick Marty accusing the authorities in Kosovo of organ trafficking?

Sec. Gen. Ban Ki-Moon:  I have expressed my support for a thorough, impartial and independent investigation into the serious allegations of inhumane treatment of people and illicit trafficking in human organs contained in this report.