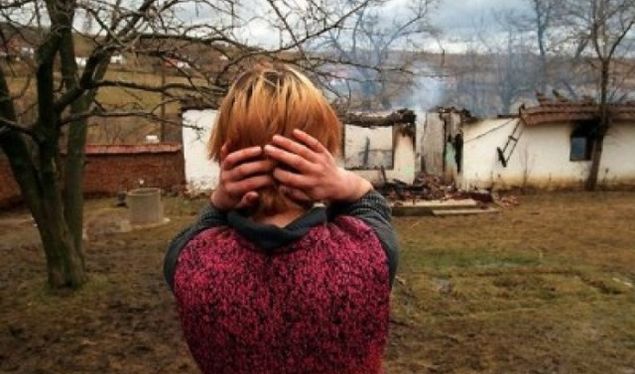 20,000 women and girls who were subjected to organized gang-rapes by Serbian and Yugoslav forces during the 16-month Kosovo War…Commanding officers bear criminal responsibility for a pattern of gang-rapes by Serbian and Yugoslav forces in Kosovo during the NATO bombing campaign, report HRW, transmete the National Information Agency “Presheva Jonë” .

Human Rights Watch documented 96 cases of rape by Serbian and Yugoslav forces against Kosovar Albanian women immediately before and during the 1999 bombing campaign, and believes that many more incidents of rape have gone unreported.

The report said that rapes were not rare and isolated acts committed by individuals, but rather were used deliberately as an instrument to terrorize the civilian population, extort money from families, and push people to flee their homes. Virtually all of the sexual assaults Human Rights Watch has documented were gang rapes involving at least two perpetrators.

The 37-page report is the first to combine all credible reporting on rape during the Kosovo conflict, and includes a map (in PDF format)of all documented incidents of rape in Kosovo.

“These are not occasional incidents committed by a few crazy men,” said Regan Ralph, executive director of the Women’s Rights Division at Human Rights Watch. “Rape was used as an instrument of war in Kosovo, and it should be punished as such. The men who committed these terrible crimes must be brought to justice.”

Human Rights Watch said its research did not confirm the allegations that Serbian and Yugoslav forces had set up “rape camps” in Pec or Djakovica. The organization criticized NATO, the U.S. government, and the British government for spreading unconfirmed information about rape while the NATO bombing campaign was underway.

Since the end of the war, rapes of Serbian, Albanian, and Roma women by ethnic Albanians — sometimes by members of the Kosovo Liberation Army (KLA) — have also been documented. Human Rights Watch condemns these human rights violations and continues to document post-conflict abuses for future reports. However, rapes and other crimes of sexual violence committed since the NATO-led troops entered Kosovo are beyond the scope of this report.

The report says that rapes in Kosovo took three basic forms: rapes in women’s homes, rapes during flight, and rapes in detention.

In the first category, security forces entered private homes and raped women either in the yard, in front of family members, or in an adjoining room. In the second category, internally displaced people wandering on foot and riding on tractors were repeatedly stopped, robbed, and threatened by the Yugoslav Army, Serbian police, or paramilitaries. If families could not produce cash, security forces told them that their daughters would be taken away and raped; in some cases, even when families did provide money, their daughters were taken away. The third category of rapes took place in temporary detention centers, such as abandoned homes or barns.

The majority of rape cases were evidently committed by Serbian paramilitaries, who wore various uniforms and often had bandanas, long knives, long hair, and beards. These paramilitary formations worked closely with official government forces, either the Serbian Ministry of Interior or the Yugoslav Army, throughout Kosovo. In several cases, victims and witnesses identified the perpetrators as Serbian special police, in blue or blue camouflage uniforms, or Yugoslav Army soldiers, in green military uniforms. Several rape victims actually reported the crimes to Yugoslav military officers. Human Rights Watch called on the International Criminal Tribunal for the former Yugoslavia to indict not only the perpetrators of rape, but also their commanding officers.

“Women in Kosovo are waiting for justice, and so far none of the Kosovo indictments have included sex crimes,” said Regan Ralph, executive director of the Women’s Rights Division at Human Rights Watch. “The sooner there are investigations and prosecutions, the sooner these women can begin to rebuild their lives.”

Human Rights Watch believes that the actual number of women raped in Kosovo between March and June 1999 is much higher than ninety-six. Due to strong social taboos, Kosovar Albanian victims of rape are generally reluctant to speak about their experiences, and those who remained in Kosovo throughout the conflict may not have had an opportunity to report abuses.

TESTIMONIES OF RAPE VICTIMS FROM KOSOVO Women and girls were pulled from lines of refugees and sexually assaulted, sometimes in front of other refugees. B.B., a twenty-two year old woman from Mitrovica told Human Rights Watch:

It happened while I was in line with the people. It was April 14th when we left our house and on the 15th we were walking near Djakovica… We met Serb paramilitaries. ..They approached my uncle and separated him. They took his gold and his money from him. Then they came up to me…He took my hand and told me to get in his car. … He told me not to refuse or there would be lots of victims. He swore at me and said, “Whore, get in the car…” He told me not to scream and to take off my clothes. He took off his clothes and told me to suck his thing. I did not know what to do. He took my head and put it near him. He started to beat me. I lost consciousness. When I came to I saw him over me. I had great pain. I was screaming and scratching the ground from the pain. Another man came with a car and he got over me. The other man with the car asked the first one why he was treating this whore so good. I was crying from the pain and he was laughing the whole time. The second one got off me and told me to put on my clothes. I couldn’t find them. Just as I got dressed another one came and took me to another place a couple of meters away and he started with the same words and did the same things the first one did. He kept me there for several minutes and then told me to wear my clothes so I [looked like I did when I left the line]. He told me not to tell anyone or they would take me for good and shoot my family. The men wore masks. They wore camouflage clothes and they were carrying weapons and knives on their belts. They said that they were paid to do this. I begged him [the first rapist] to kill me but he didn’t want to.

Z.T., a twenty-three-year-old woman, was being held in a house in Drenica by special Serbian forces:

I was held in a room full of women. The police came, and gestured for me to come. A policeman made me take off my clothes and he found a note that I was hiding in my underwear on which I had my husband’s telephone number in Switzerland. He tore up the note and started swearing at me. I went back to the group of women and the same policeman came back and said, “come here.” He took me far away from the other women and did whatever he wanted with me.

They put us in a small barn with hay in it. Then the four men came into the barn and slammed the door and pointed machine guns at us. They asked for gold, money, and whatever we had. We gave whatever we had. But they were still torturing us. They would take a girl, they kept her outside for half an hour, and after that they would bring one back and then they would take another. Then they took me. I was pregnant. I was holding my son. They took him away from me and gave him to my mother. They told me to get up and follow them. I was crying and screaming, “Take me back to my child!” They took me to another room. It was so bad I almost fainted. I can’t say the words they said. They tortured me. Because I was pregnant, they asked me where my husband was… One of them said to another soldier, “Kick her and make the baby abort.” They did this to me four times-they took me outside to the other place. Three men took me one by one. Then they asked me, “Are you desperate for your husband?” and said, “Here we are instead of him.”

In Pec, six armed and uniformed Serb men entered a house two days before NATO entered the city. Before murdering six members of her family, the men raped one of the women, a twenty-eight year old mother. Her sister-in-law witnessed the rape and the murders:

They were wearing military clothes and had black scarves on their heads. They took my sister-in-law into the front room, and they were hitting her and telling her to shut up. The children were screaming, and they also screamed at the children. She was with the paramilitary for one half- hour. She was resisting, and they beat her, and the children could hear her screaming. I could only hear what was going on. I heard them slapping her. The children did not understand that they were raping her. After they raped my sister-in-law, they put her in line with us and shot her.