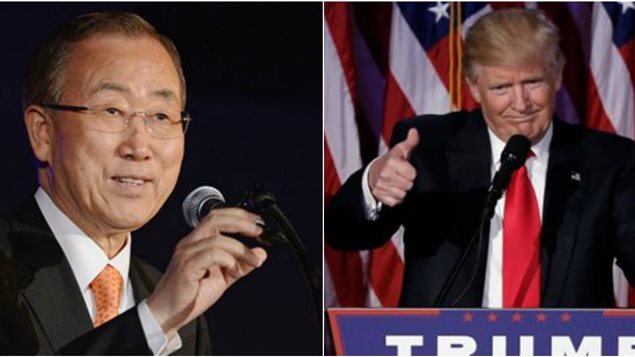 In a phone call this afternoon, the Secretary-General congratulated Mr. Donald Trump on his election as the forty-fifth President of the United States of America.

The Secretary-General expressed confidence that the United States and the United Nations would maintain their traditional strong ties of cooperation to advance peace and security, sustainable development and human rights throughout the world.

The United Nations will count on the new Administration to strengthen the bonds of international cooperation as we strive together to uphold shared ideals, combat climate change, advance human rights, promote mutual understanding and implement the Sustainable Development Goals to achieve lives of peace, prosperity and dignity for all.

Now more than ever, we must mobilize around the principles and common values of the United Nations Charter.

I would also like to express my deep appreciation to former Secretary of State Hillary Clinton for a lifetime commitment to peace, the advancement of women and the well-being of children.

She has been a powerful global symbol of women’s empowerment, and I have no doubt that she will continue to contribute to our work across the world.